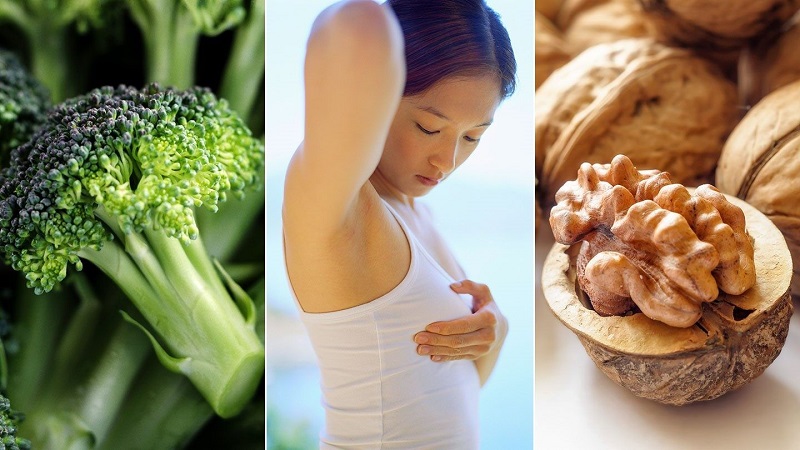 In general, breast cancer is classified among the most frequent neoplasms by incidence in the world female population. It appears to be the most diagnosed among women under the age of the 49-year-olds (41%), in those falling within the 50-69-year-old group (35%), and in the older class over 70 years old (21%).  Breast cancer is caused by a DNA mutation in breast cells that grow to invade surrounding tissues and develop a carcinoma. By taking these breast cancer-fighting foods daily, you can stay away from the fatal disease.

Maintaining a healthy diet, in addition to having important benefits on general health, helps to slow down or prevent cancer. Here is a list of 10 foods that have been shown to be effective in preventing breast cancer.

The vegetables of this family contain a group of substances known as glucosinolates, chemical compounds containing sulfur that give cruciferous vegetables a typical bitter taste and a strong scent.

Some animal studies have shown that the chemicals contained in these plants can help prevent cell damage and cause the death of malignant cells.

Studies have suggested that substances such as lutein and zeaxanthin, found in dark green leafy vegetables such as spinach and kale, could help reduce the risk of breast cancer. In fact, a meta-analysis was conducted to measure the relationship between breast cancer and vegetable consumption.

The Nurse’s Health Study has published a report that demonstrates how the intake of beans and legumes, such as lentils and chickpeas, is correlated with a reduction in the risk of breast cancer.

In general, beans and legumes represent an excellent vegetable protein front for our diet, especially if you choose to reduce the consumption of meat or to adopt a vegetarian or vegan diet. Beans and legumes also provide important nutrients such as calcium, iron, and B vitamins.

The consumption of tomatoes, rich in antioxidants, is essential for a healthy and balanced diet. Also, as specified by a breast cancer nutritionist, choosing to eat fruit rich in lycopene, such as tomatoes, as well as watermelon and papaya, can help prevent cancer.

5. Fruits and vegetables in general

Consuming fruits and vegetables can have a preventive effect on the possible development of breast cancer, as they are in general very rich in antioxidants and vitamins ( vitamin C, E and folic acid ), but also an important source of dietary fiber. For a proper diet, try to include a minimum of five servings (about 400g) of fruit and vegetables in your daily meals.

Researchers have verified the effects that polyunsaturated fatty acids, such as omega-3, of which fatty fish are rich (for example, salmon and tuna), have on our health. The studies conducted found that out of a total sample of 800,000 women, only just over 20,000 developed breast cancer during the observation period. It was shown that women who had a higher intake of polyunsaturated fatty acids resulting from the consumption of fish (14%) had a reduction in breast cancer, compared to those women who, during the observation period, had eaten less amount of fish.

Olive oil would always be preferred for cooking and for dressing foods such as salads. In fact, it is rich in antioxidants and phytonutrients, which are essential for reducing and preventing oxidation and the formation of free radicals that cause the onset of tumors.

A study conducted on a sample of women showed that those who maintain a typical Mediterranean diet, who are therefore used to adding extra virgin olive oil to their meals, had a lower risk (62%) to contract breast cancer within the next 5 years.

Seeds are an excellent food to introduce into your diet to prevent the formation of breast cancer. In fact, flax seeds contain substances such as lignans which, according to research conducted in 2009 on a sample of menopausal women, are able to reduce the risk of getting cancer.

Foods rich in soy such as edamame, tofu, miso, soy milk contain large amounts of phytoestrogens. The U.S. National Cancer Institute found that women who maintain a diet rich in soy have less dense breast tissue than those who avoid or consume little soy. In fact, denser breast tissue has been correlated with a greater risk of cancer cell formation.

One of the active ingredients of soy is isoflavone, a chemical very similar structurally and functionally to estrogen. However, manages to block the action of these hormones at high levels can increase the risk of breast cancer. Read here to learn more.

Recent research on the eggs of the tropic Zebrafish fish seems to show a powerful anticancer action. Of course, it cannot yet be said that caviar has these properties.